Who said it?: Comic Book Guy

The story behind the quote: The quote comes from The Simpsons’ very own Jay Albertson. You may not know him by his birth name but you probably know him better as Comic Book Guy, the overweight proprietor of the Android’s Dungeon comic book store.

Unfortunately, I can’t find the exact clip on YouTube. However, since the phrase has become Comic Book Guy’s catchphrase, I was able to get this clip…

And, just in case the clip gets yanked off YouTube, here’s a pic of the quote: 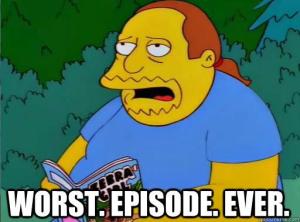 Geek wisdom: People have opinions. Some of these opinions will be in direct contrast from your own. You may like a particular television show or episode while the entire world may see things differently and hate it with a passion. These variations can be due to a huge number of reasons.

But it’s not really important to know the reason for these differences. What is important is to know that there are going to be different points of view on the same topic and you’re opinion is as valid as the rest of the world.

Most of my childhood (and adult life) was spent doing a lot of geeky stuff: watching TV, playing video games and going to the movies. To some, it may have been a waste of time. Well, to me, it has made me what I am today... a geeky adult. I actually write for a couple of blogs, namely: geekwisdom.wordpress.com 3rdworldgeeks.com gamemoir.com Please check them out! View all posts by Victor de la Cruz

One thought on ““Worst. Episode. Ever.””