Who said it?: Charles Xavier

The story behind the quote: The very first live-action X-Men films, which was shown in 2000, clearly showed that the friendship between Charles Xavier (who would become Professor X and the founder of the X-Men) and Erik Lehnsherr (also known as the mutant terrorist, Magneto) has ended. While they do behave cordially when they talk, it is clear that they have opposite ideals for how mutants should interact with the ordinary humans. However, the films never explored their friendship as deep as the pseudo-reboot in X-Men: First Class.

The film starts in the 60’s around the time of the Cuban Missile Crisis. A mutant named Sebastian Shaw is attempting to start World War III in the hopes that mutants will take over after the war. Erik Lehnsherr has a personal stake on this as he witnessed Shaw kill his mother during the Holocaust.

Since he has been training his mutant ability at an extremely young age, he believes that he has gained ultimate mastery of it. As proof, he tells Xavier to shoot at him point blank with a gun since he knows he’ll be able to stop the bullet as it fires. Xavier then tells him that, if that’s the case, then he’ll never really become as strong with his ability as he can.

Geek wisdom: It easy to play it safe and be satisfied with what we know, never really venturing outside our comfort zone. Even thinking of trying to do something that is extremely difficult makes us uneasy and, mentally, we can give up without trying. But the only way we can improve ourselves is if we try to do something difficult.

It’s like when we were toddlers; we could could move around by crawling. There was really no need to walk since crawling was sufficient. We don’t remember it but we all struggled with learning how to simply stand up and we fell down a lot. However, with practice, we all now able to stand on our own two feet.

Any task can seem daunting and even impossible. However, unless we try and practice several times, we will never really be able to say it’s impossible.

Who said it?: Emma Frost

The story behind the quote: When Emma Frost first appeared in comics, she was a villain, fighting against the X-Men. However, after numerous battles with them, she eventually joined the X-Men and actually took over as headmistress of the Xavier Institute for Higher Learning and she took her job of preparing the student of the school seriously.

During one of her speeches to the student body, Emma announced that they will be changing the way they will be taught but they will be educated on how to deal with a world that shuns mutants. During the end of her speech, she comments that the students who are complaining about the harsh teaching methods of Wolverine/Logan are wasting their breath. She then delivers the quote as she expects them to be ready for anything. 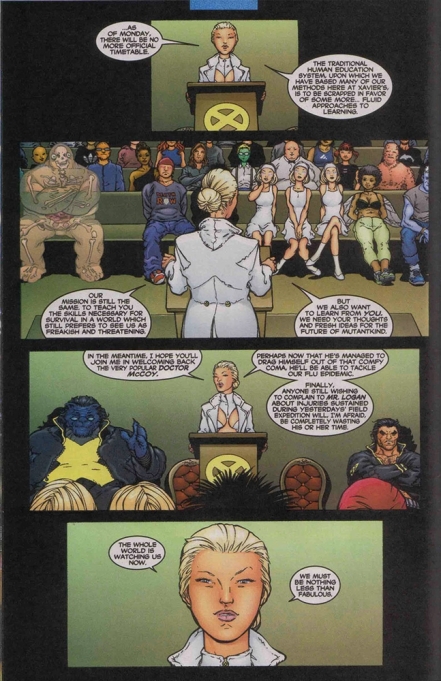 Geek wisdom: The worst things can happen at any time, especially when you least expect it. Rather than scramble and jump in to fix it, it’s always a good thing to be ready for it.  Like Emma Frost said, the training that the students are doing may be difficult but it is actually for their own benefit as people are looking at them closely. If they’re going to slack off and not be able to control themselves during something that’s planned, it’s going to be much worse when real danger rears its ugly head.