Who said it?: Narrator?

The story behind the quote: The quote comes from Nintendo’s franchise, Pokemon. This game was one of the biggest reasons why the Game Boy was a smash hit. In the game, you play the role of a Pokemon trainer who tries to travel the world and capture all of the possible Pocket Monsters out there. However, you will have to defeat them by pitting your own monsters against them as well as defeat other trainers who have the same goal.

There is a strategy, however, regarding which Pokemon to unleash. Depending on what element the creature is, you can dish out more damage by selecting the proper creature that has the opposing element. For example, Pikachu, who is the electricity element, will be able to do more damage to a Slowbro, which is a Water type Pokemon. When you do pick the right Pokemon and it does an attack, you’ll get the quote. 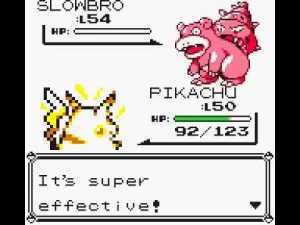 Geek wisdom: It’s always best to use the right tools for the right job. You can try to use a substitute tool and it could work. But it may the job much harder. Try to work smarter, not harder.

Most of my childhood (and adult life) was spent doing a lot of geeky stuff: watching TV, playing video games and going to the movies. To some, it may have been a waste of time. Well, to me, it has made me what I am today... a geeky adult. I actually write for a couple of blogs, namely: geekwisdom.wordpress.com 3rdworldgeeks.com gamemoir.com Please check them out! View all posts by Victor de la Cruz

One thought on ““It’s super effective!””